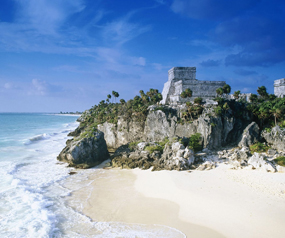 This worldwide tourist attraction is one of most exotic and remarkable sights you can experience while visiting the Riviera Maya. Tulum was at one time known as the City of Dawn. This Mayan city was walled and protected and given the name Tulum which in Mayan means “wall”.

Originally Tulum was walled on three sides. Today more than 60 buildings remain to view. Standing tall on the edge of the cliffs, the largest tower was thought to be a light house and show that it was probably built somewhere between the 13th and 15th century. Tulum is 60 km south of Playa del Carmen.
The town is small yet rich in shops and restaurants. Tulum has a large hotel zone along the beach line, each hotel with its own twist on the beach area. Rent a cabana on the water or stay in a traditional setting. The remote and tranquil hotel zone areas are lush with Pelicans and the water is as clear as glass making it the perfect setting for snorkeling, catching a glimpse of a sting ray or maybe even a sea turtle.

The entire Tulum area is well protected, as it ends in the Sián Kahn Biosphere, which is located at the end of the south road in the Tulum hotel zone. Shortly after the President announced the approval of the International Airport in 2009, Tulum was declared a new city within the state of Quintana Roo. This approval is expected to draw even more attention to the quickly growing area. With several new developments already under way we should expect great things from Tulum in the future. More than 500,000 travelers visit Tulum annually.