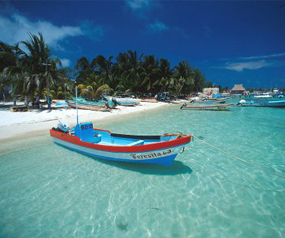 The name Isla Mujeres is in memory of the goddess Ixchel. When the first settlers landed on the island they discovered the Mayan goddess Ixchel with her daughters. Over the years many famous women brought attention to the Island.

Several statues are still on display today that show the amazing love stories that have unfolded over the decades. Isla Mujeres was unoccupied for three decades until famous pirates were documented to have buried treasure on the Island in the sparkling white sand beaches as well as the jungle areas. The Island was a safe hold for pirates to leave their women and treasure while they sailed the high seas.
After the independence of México the area was slowly developed into a small village that is now the main centre of the Island. Tourism did not really start in Isla Mujeres until the 1960’s when a ferry dock was built to carry regular visitors to the Island.

Isla Mujeres is still one of the most tranquil and beautiful untouched beaches in the Caribbean.
The island is well known for breathtaking sunrises, as they are located in the most eastern point of México. Isla Mujeres is complete with Mayan ruins, great water for snorkeling, fishing, swimming, great beaches for tanning and rare and beautiful wildlife for the adventurer.