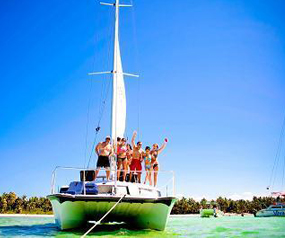 Cancún is a city in southeastern Mexico, located on the southeast coast of the Yucatán Peninsula in the Mexican state of Quintana Roo. It is a major world-renowned tourist destination,[2] as well as being the seat of the municipality of Benito Juárez. The city is located on the Caribbean Sea, and is one of the easternmost points in Mexico. Cancún is located just north of Mexico’s Caribbean coast resort band known as the Riviera Maya.

México’s President Echeverria’s tourism program, initiated the growth of Cancún in 1960. The Cancún project included the construction of a tourist zone, a Residential area and the Airport. By the 1970’s the first two hotels were completed, they were the Palacio Maya and Club Med. Both built great reputations in the area.

Located on the Yucatán Peninsula, Cancún is well known for its underground river systems, Cenote’s and the Gran Arrecife Maya, which is the second largest reef in the world.

From 1989 to date, Cancún has been the country’s most dynamic city. It contributes a large percentage of México’s tourism-related revenue and accounts for much of Quintana Roo’s gross domestic product. There are currently more than 600,000 inhabitants in the area. Cancún has become the nation’s largest tourism resort and is the most prosperous city in the Yucatán Peninsula. It is also the Caribbean’s premier destination, surpassing even the Bahamas and Puerto Rico.